Aged fourteen, Albert Mertz (31 January 1920 – 30 December 1990) had his first show in 1934 with his friend Dan Sterup-Hansen before, aged only sixteen, being admitted to the Royal Danish Academy of Fine Arts in 1936. Two years later, he left the Academy in protest against what he considered old-fashioned teaching. Concurrently with his visual art, he started making films that were considered fairly avant-garde in contemporary art circles. The established art scene actually looked down on this medium and Mertz was dubbed ‘dishonourable’. That did not bother him much, though, and up through the 1940s, he directed several experimental films, among them ‘Flugten’ (The Escape) from 1942, considered the first Danish one in this category, in collaboration with Jørgen Roos and featuring the artist Robert Jacobsen in the lead role. Mertz continued to make films to the end of the 1950s, experimental films as well as short films commissioned by the government such as ‘Instruktion for arbejdspladsen’ (Instructions for the Workplace) from 1956.

Towards the late 1940s, Mertz founded the artists’ group Linien II with e.g. Ib Geertsen and Richard Winther. Linien II was to provide a framework for concrete art, but once again Mertz went his own ways, not entirely in keeping with the objectives laid down. At the group’s first exhibition, he showed some trash Dadaist-inspired collages and assemblages. Nevertheless, Mertz remained one of the group’s chief ideologists with his concepts about the artistic material being key rather than the inner life of the artist – the subjective emotions had to go.

Up through the 1950s, Mertz also continued to work with painting. In 1952, he made a draft proposal for a commission for the train station Østerport with the painting ‘Fløjtemand’ (Whistling Man), which became highly popular with a broad section of the public. The painting represents the prevalent view on Mertz the painter in the 1940s and 1950s – a Copenhagen motif expressed in a modern figurative language, but still down-to-earth and comprehensible. A painting composed in almost geometric shapes, but still embodying a realistic expression and clear references to concrete art and the group Linien II, to which he still belonged at this time. Later, in 1957, he did more odd sculpture works like ‘Bærepindeballet’ where small painted sticks in various heights are fastened to the inside of a box. This sees the emergence of the playful and experimenting Mertz.

In 1963, Mertz moved to France, first to Menton in Southern France and later to Paris where he lived until 1975. The years in France became a kind of working exile for Mertz where he, apart from maintaining a prolific production, also kept himself updated about international art. He read the leading journals and wrote articles for the Louisiana Revue from the Venice Biennale, for example. Nevertheless, Mertz’s art never achieved a major international breakthrough and his works were mostly sent back to Denmark to be shown at exhibitions – at Clausen’s Kunsthandel, Grønningen, and later Den Frie. He was able to work in peace in France, but he was also very isolated and realised that Paris was probably no longer quite the hub of the art world. During the period 1969–1971, Mertz developed what became his unique signature: the red+blue proposition – mostly in the form of a rectangle consisting of a red square on the left and a blue one on the right.

In this colour combination of the two opposites of red+blue, Mertz saw a kind of universal emblem that could be incorporated into a number of contexts. In the words of Mikkel Bogh in the article ‘Mertzhuset’ (The Mertz House) from 1999, Wittgenstein’s ‘concretist philosophy’ concerning ‘the meaning is the use’ could be a fitting heading for the red+blue examination. Neither words nor statements have any meaning per se, but are given meaning through their use. With red+blue, Mertz wanted to examine this specific use on the basis of an expression that was as clear as possible – free from conventions of any kind. He used this colour combination from then onwards, expanding the pure form of the two squares to many different motifs. The red+blue-proposition became central in Mertz’s attempt at creating a free space in art.

In Paris, Mertz commenced his great note work where he wrote down his thoughts on art in a kind of diary form – considerations of various kinds on the subject of making art, being an artist, etc. The note system is divided into various books called e.g. Workshop Books, Red + Blue, Rubbish Books, and actual diaries. Today, based on their width and depth, these writings are unquestionably considered weighty and unique works in Danish art history.

From 1975 until his death in 1990, Albert Mertz was back in Denmark, although he lived away from Copenhagen and the art scene – on the island of Glænø south of Skælskør. During the 1980s, his art was especially centred on the red+blue proposition and he showed with the American artist Lawrence Weiner and others. He returned to the Royal Danish Academy of Fine Arts where he became professor in 1979, introducing the pupils to a number of international visiting lecturers and co-founded the School of Media Art. Mertz also participated in several cultural programmes on TV. His last project was the great presentation of his works for the twenty-first São Paulo Biennial in Brazil in 1991 where he thus officially represented Denmark posthumously.

Albert Mertz left behind one of the most fascinating Danish body of works of the twentieth century. As a general heading, one could say that he was constantly engaged in examining art, not least its relationship with reality. He experimented, doubted, and popped the question: what is art? He pursued his artistic idea and expressed it in all media from painting, drawing, and collage to sculpture and film. All the way through, he was a powerful voice in the art world with his many articles and texts and he kept abreast of developments both in Denmark and internationally. Mertz’s important position in post-war art history is summed up fairly accurately in Mikkel Bogh’s description of him in Volume 9 of Ny Dansk Kunsthistorie (A New Danish Art History). Bogh points to Mertz as an important link between the abstract art of the 1940s and post-war neo-avant-garde currents and much of the development that occurred during the last half of the century is mirrored in Mertz’s art.

Albert Mertz was active for a very long period, from 1933 and continuing right up to 1990, and the works he produced were innumerable. His influence on Danish art was significant during his lifetime – he had his first retrospective show in the Kunstforeningen (the society of Fine Arts in Copenhagen) aged 42 in 1962 – and his work production and exhibition activities were particularly prolific during the last ten to fifteen years of his life when he also worked as a professor at the Royal Danish Academy of Fine Arts in Copenhagen. Since then, the interest in his art and the influence of his work have only escalated. Art historians, curators, and (also younger) artists increasingly write about, show, and ‘use’ his works. A number of major exhibitions have been featured by museums and galleries in Denmark, but international interest, too, is becoming increasingly evident. Gallery shows, presentations at art fairs, and curatorial interest are growing in Europe and the USA. 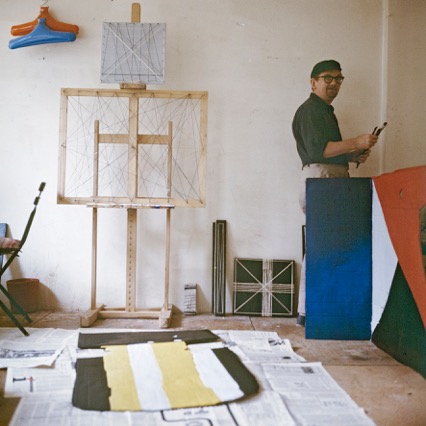