about my work. ENG

I am born 1920 in Copenhagen, and have worked with pictoral art since I was 13 years old, therefore it can be of no surprise, that I have been moving widely around in the area of art, and that the influences have been of great variety.

Regarding the Danish art-milieu provincial and restrictive in the beginning of the sixties I moved to southern France and later to Paris. It was a very fruitful period, which meant a certain clarity of my artistic thought.

In the end of the sixties, when Minimal and later Conceptual art were dominating I became very occupied with Ad Reinhardt and his art dogmas. Daniel Buren’s theories and works I followed with great interest, and when Joseph Kosuth in 69 in Studio International published his “Art After Philosophy” it made a very strong impression on me, like Lawrence Weiner’s work with language as material. I mention this to clarify the sources of inspiration to the work I at that time was in the middle of, and which I steadily have continued.

Because of the fact that my starting point was painting, I found it natural to try to solve the problems, I was facing in this media. I wanted to break down the painting as an object and as an image. For this purpose I reduced my possible selections to the extreme limitation: Two squares, the left red, the right blue, together forming a rectangle. The square was chosen as the most neutral form. Red and blue represent the two extreme points in the colour scale, the warmest and the coldest, including a representation of several of the other colours in the scale.

By repeating this proposition over and over: red/blue, squares, rectangle, I wish to point out, that it is not about painting, but about a presence, which content is determined by the situation and the surroundings it is situated in. Content determined by context. As a reaction against the belief of modernism, that the art is renewed by steady ongoing form renewals.

Joseph Kosuth has made this clear statement: “There are no new forms only new meanings. An artist is engaged in the making of meaning.” Having been occupied with this proposition in about 15 years it has proved, that this very restricted choice has still revealed new possibilities. I am all the time aware of the danger, that it shall become a style or a signature.

The work demand in fact to be carried out in situ – the place in which it shall be seen. The possibilities for this are very limited in a little country as Denmark, why many of my works have been realized as transportable objects (paintings), but always with this consideration, that they could fit a given situation. Those working conditions have e.g. caused that I during certain periods have tried to work in a pictogram-like structure, which as far as possible maintained the terms of the red/blue proposition.

I am against any form of expressivity and mythologisation of the artist. I want art to be a dialogue between human beings, want to cancel the idea of artist opposite observer. The art should be part of the present reality and not a mythological investing fetish-object. Therefore it is important that the art arises between human beings, and there where human beings move in daily life, of course as a presence, and not provokingly insisting on itself.

I have always been searching and still I am for a way to function as an artist outside the traditional conceptions. The red/blue proposition is a little step on the way in this search. I never wanted to be locked in certain solutions, and will not let me be wrested from the freedom to change view. 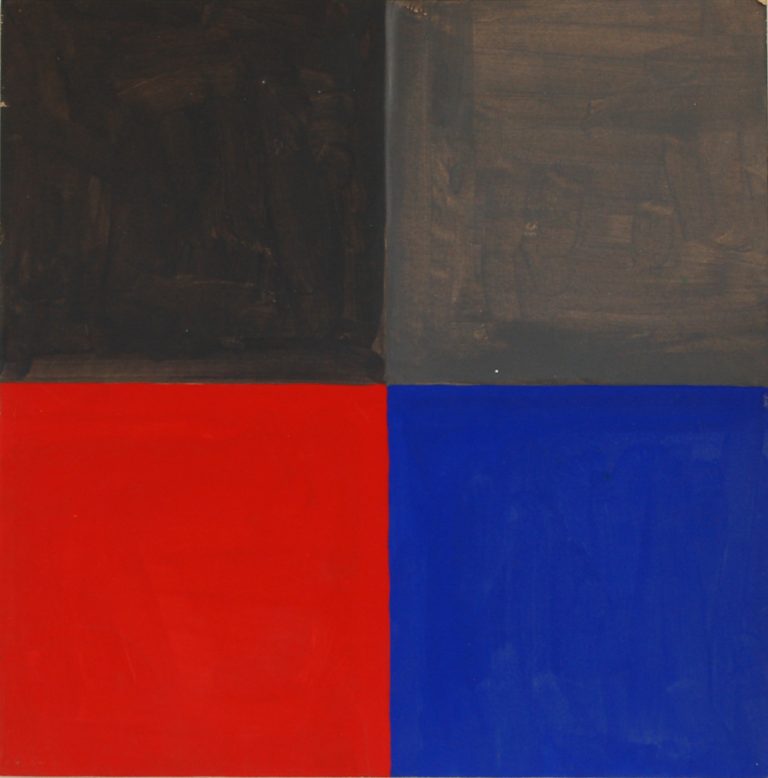